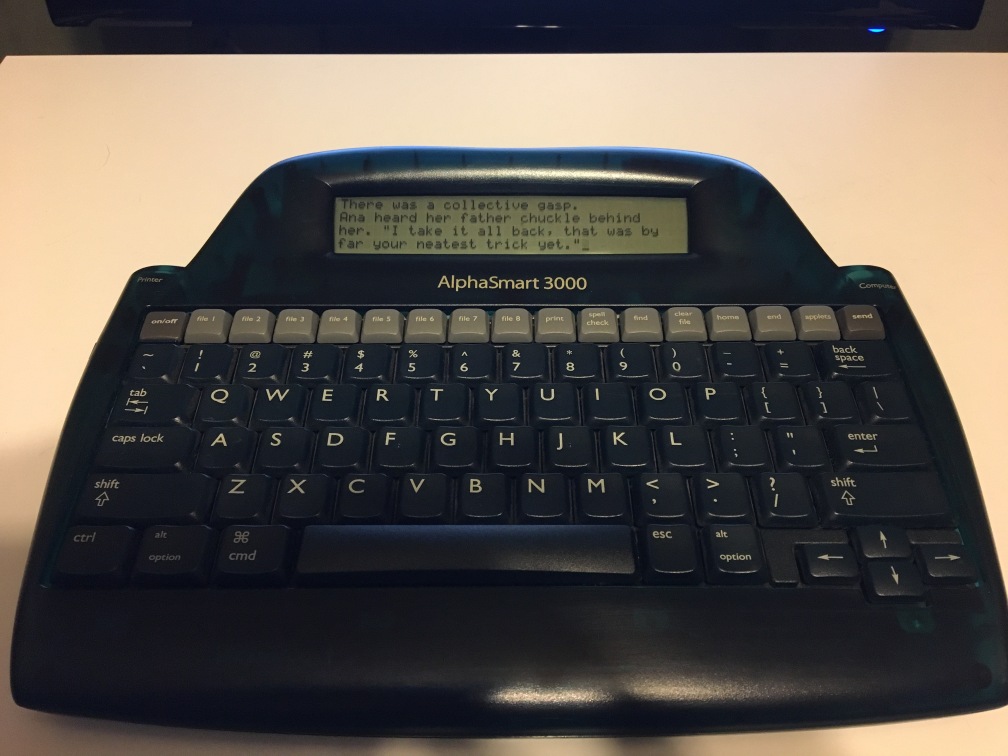 I know what you’re going to say…but, Josh, you just showed us the nifty little Bluetooth keyboard you paired with your existing iPad Mini so that you wouldn’t be tempted to buy yet another writing device. Obviously I have a problem, so sue me. Some people smoke, some people drink,  some people eat too much, and some people have a tech addiction. What can I say? I don’t smoke.

Anyway, I actually have a couple of really good excuses…er uh, reasons to buy this particular piece of obsolete technology. Obsolete you say? Why would I buy a piece of obsolete machinery, especially the kind I had previously owned and then sold? Well, I’ll tell you why, and quit looking at me like that. Don’t play coy with me, you know you were secretly judging me.

Any-who, like I was saying, I once again bought a wonderfully obsolete AlphaSmart 3000 because it’s the kind of singular purpose device that the world used to make before we became so obsessed with making every device we use into some kind of unnecessary Swiss Army Knife-esque (shut up, I know it’s a made up word) abhorrent thingy-ma-bob. The kind of abhorrent machines that do a million things at once, but none of them particularly well. The AlphaSmart, originally designed for use by children in classrooms, does one thing exceptionally well. It allows a person so inclined to bash out words free from distraction and untethered from the seductive wiles of the interwebs.

Put simply, you turn it on and type. When you are finished typing, you connect a simple usb cable to it and your computer and open a text file and click the send button on the Alphie (Writer slang for an AlphaSmart). Then you sit back and watch as this simple, sturdy and fun little device spits out your text character by character into the file on your computer. It’s brilliant and I love it. It has a low power screen that lets you see just enough to correct mistakes without overthinking and letting self editing get in the way of that vital first draft. It also runs for about seven hundred hours (yes, you read that right, 700 hours) on three double A batteries, and has roughly a one hundred page capacity.

The Alphie is also unbelievably rugged, and since I only paid twenty dollars on eBay for it (that includes shipping), I won’t be out a bunch of money if something happens to it, unlike a laptop…or even my wonderful iPad Mini with the BlueTooth keyboard. The only sad thing about AlphaSmarts is that the company no longer makes them. Luckily you can still find tons of them on eBay and since they’re so rugged most of them look relatively new despite their age. Seriously though, if I ever win the lottery, I think I might just call up the company and see if I can buy their intellectual property and start making them again myself. There are a ton of writers who swear by them to this day and would probably kill to be able to buy a new one. Even the wildly successful James Scott Bell uses one. There’s even a lovely group on Flickr of all places devoted to the wonders of the AlphaSmart.

But I digress, as usual. The main reason I bought another Alphie is that I decided to participate in NaNoWriMo again this year. That’s short for National Novel Writing Month for all of you not in the know. Which brings me to another contradiction. Instead of using NaNoWriMo to work on my new mystery series, I decided to use the time to finish the first draft of the sequel to The Sixth Seal. I know, I already said I was going to let that sit for a time while I took a different path, but then I changed my mind. Again, so sue me.

I’m still very much into writing mysteries, but that’s not the kind of thing I want to rush through in the mad dash that is NaNoWriMo (50,000 words in one month). Mysteries are complex creatures with twists and turns and red herrings…and maybe blue ones too if you’re really talented. In other words, I want to take my time with the mysteries and get all of the details right. The sequel on the other hand has already been playing out in my mind for the last few years. I just needed the right kick in the pants to get through the first draft and NaNoWriMo is the perfect kick in the pants. Plus, I had a reader email me and tell me how much they enjoyed the first book and how they were eagerly awaiting the second. So essentially I was guilted into it. In truth the characters had been guilting me for quite some time, so I decided I’d better get it done. What better way to do that than with a new, used, wonderfully obsolete AlphaSmart 3000 I ask you?